GCF’s Emergency Appeal for Child Refugees in Tanzania has $350,000 pledged in less than a month since the campaign’s launch.

July 24, 2020 — “The child refugees living in camps across Tanzania are amongst the most vulnerable and at risk in the world. Their dire situation, amplified by fear of COVID-19, has deeply concerned our global community and has urged us to act quickly,” iterates GCF’s CEO, Talimka Yordanova, during Friday’s Concordia Live webinar.

The cruel reality is such that, there are more than 300,000 displaced people living in over cramped and underfunded refugee camps in Tanzania. And amongst those in urgent need are the children.

According to UNHCR’s Spring 2020 data, Tanzania has received only 9% of the total funding requested, continuing a pattern of its humanitarian response being chronically underfunded by foreign aid or external support and making GCF’s Emergency Appeal for Child Refugees in Tanzania a timely and vital cause.

The live webinar was moderated by Talimka, which was hosted on Concordia’s Live platform, with GCF Founder Armand Arton, Program Director of Save the Children International Bester Mulauzi, as well as Grammy Award-winning artist, producer, and philanthropist Wyclef Jean. 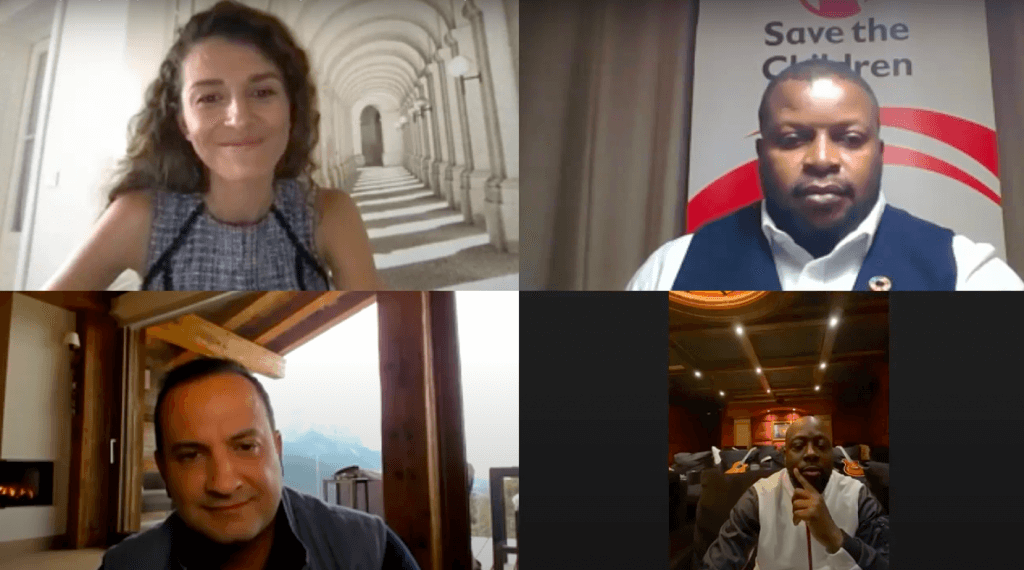 GCF’s collaborative initiative with Save the Children and Wyclef Jean aims to raise $1 million to fund the vital needs of over 30,000 children in the Nduta and Nyarugusu refugee camps.

“We call the current situation in Tanzania a forgotten crisis, because very few around the world know that Tanzania hosts more than 300,000 refugees,” shares Mulauzi. “And over half of these refugees are children.”

According to the Program Director, more than 40% of refugees and asylum seekers continue to live in inadequate emergency shelters and tents. They are not allowed to leave the camps and cannot take part in any income-generating activities. These stringent policies have made it very difficult for these refugees to meet their basic needs and create sustainable livelihood.

“Aside from a big health crisis, this has also led to negative coping mechanisms, which leads to early marriage, increased sexual violence, lack of protection of children and women, and the unfortunate neglect of children.”

Although Tanzania’s COVID-19 cases are not as high as in other parts of the world, putting the efforts towards this very vulnerable community in advance is essential, according to GCF Founder Armand Arton.

“We’ve spent 3 months in quarantine, and we complain. These kids have spent 17 years of their life in a confinement of a tent without any of the basic necessities,” said Arton. “We need to be more sensible. We need to be more human. We all have a role to play.”

“Refugee rights has been a cause close to my heart from the start,” shared Wyclef Jean as he recalled his personal story of losing family that fled Haiti to Miami without making it to shore.

“One thing people used to say is: You live in Brooklyn, why are you so worried about Africa. You live in New Jersey, why are you worried about Haiti? And what I used to tell them is, have you ever looked at the world from a satellite point of view. And if you do, then you’ll understand that we are all people. And everything is cause and effect,” he said.

When asked about what this cause meant to him, Wyclef shared that the Emergency Appeal is much bigger than just raising the $1 million, but rather about influencing and altering the mindset of those in power who can make a much bigger difference.

“People don’t look at [asylum seekers] as people. If they did see them as people, those within senates and parliament would fight for policies that really concern these issues.”

Less than a month after the campaign’s launch, $350,000 has been pledged to help save these children. Following the webinar, Concordia facilitated a donation of $50,000 to the campaign directly from its Leadership Council Member, His Royal Highness Prince Abdulaziz bin Talal bin Abdulaziz Al Saud.

Concordia, a New York-based nonprofit dedicated to supporting the cross-sector partnership ecosystem to address pressing global issues, also committed its partnership building support in the lead up to its 10th Annual Summit, taking place this September. This generous donation from Concordia’s Leadership Council Member, HRH, will support the partnership strategy of the campaign towards driving new in-kind and monetary resources to this forgotten crisis and structuring sustainable, impactful partnerships to support those most in need.

Join us in this vital cause and make a difference in the lives of these forgotten refugee children.